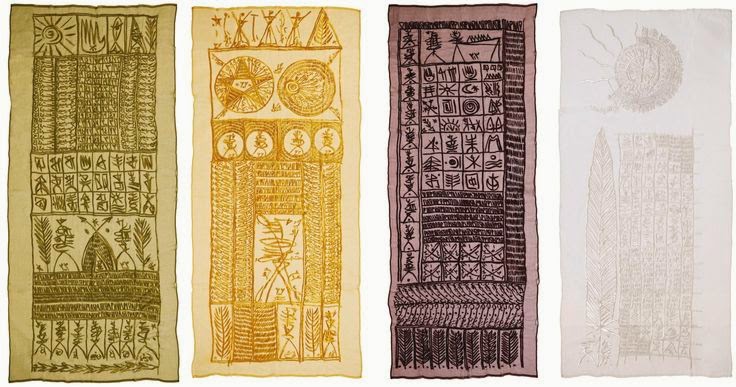 Rachid Koraïchi
B.1947
NEDJMA (THE FOUR SEASONS)
hand woven and embroidery silk, in four parts
Each: 304 by 152 by 7cm.; 119 3/4 by 59 7/8 by 2 3/4 in.
Executed in 2009.
Born in Algeria in 1947, the descendant of an old Sufi family, Rachid Koraïchi works with effortless facility in several contrasting mediums, producing pieces that belong firmly within the Sufi tradition yet nonetheless encompass intriguing aspects of modernity and universality. Through the use of Arabic calligraphy and symbols from both ancient and current cultures, Koraïchi movingly investigates the lives of the fourteen mystics of Islam; great Muslim thinkers and poets such as Rumi and El Arabi whose visions remain enduring to this day. More
Posted by Henry Zaidan at 9:49 AM