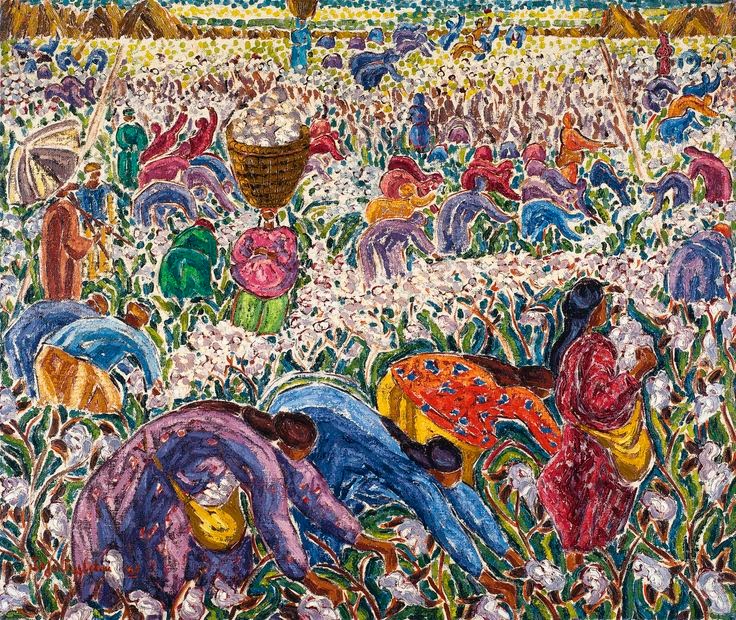 Inji Aflatoun
1924 - 1989
L'OR BLANC (WHITE GOLD)
signed and dated 63; signed and titled on the stretcher
oil on canvas
66.5 by 79.5cm.; 26 1/8 by 31 1/4 in.
She further pursued her art education under the tutelage of Kamel El Telmissany, one of the founders of the Art and Freedom movement.  He introduced her to the life of common Egyptian peasant, which was a far cry from her upbringing and education at Lycée Français du Caire.  Efflatoun’s immersion into the common Egyptian life transformed her into a staunch nationalist. She refused to further pursue her artistic education in France at the behest of her family. Rooted in her need to discover her Egyptian identity, Efflatoun recounts: “it was impossible for me to leave Egypt and go to counties of the foreigners when I was passing by a hard period of Egyptianizing myself, all my life I talked in French. Eighteen years have slipped in my life in this secluded society even in my native language I could not talk it to the extent that when I began really frequenting the people of my country I couldn’t communicate with them in their language. What a misery I felt un-rooted.” More
Posted by Henry Zaidan at 10:44 AM