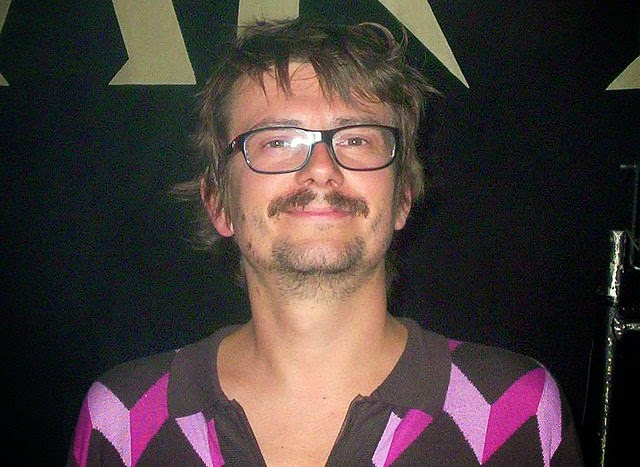 The surviving Charlie Hebdo cartoonist who frequently drew Mohammed for the newspaper has announced he’s retiring the character. More 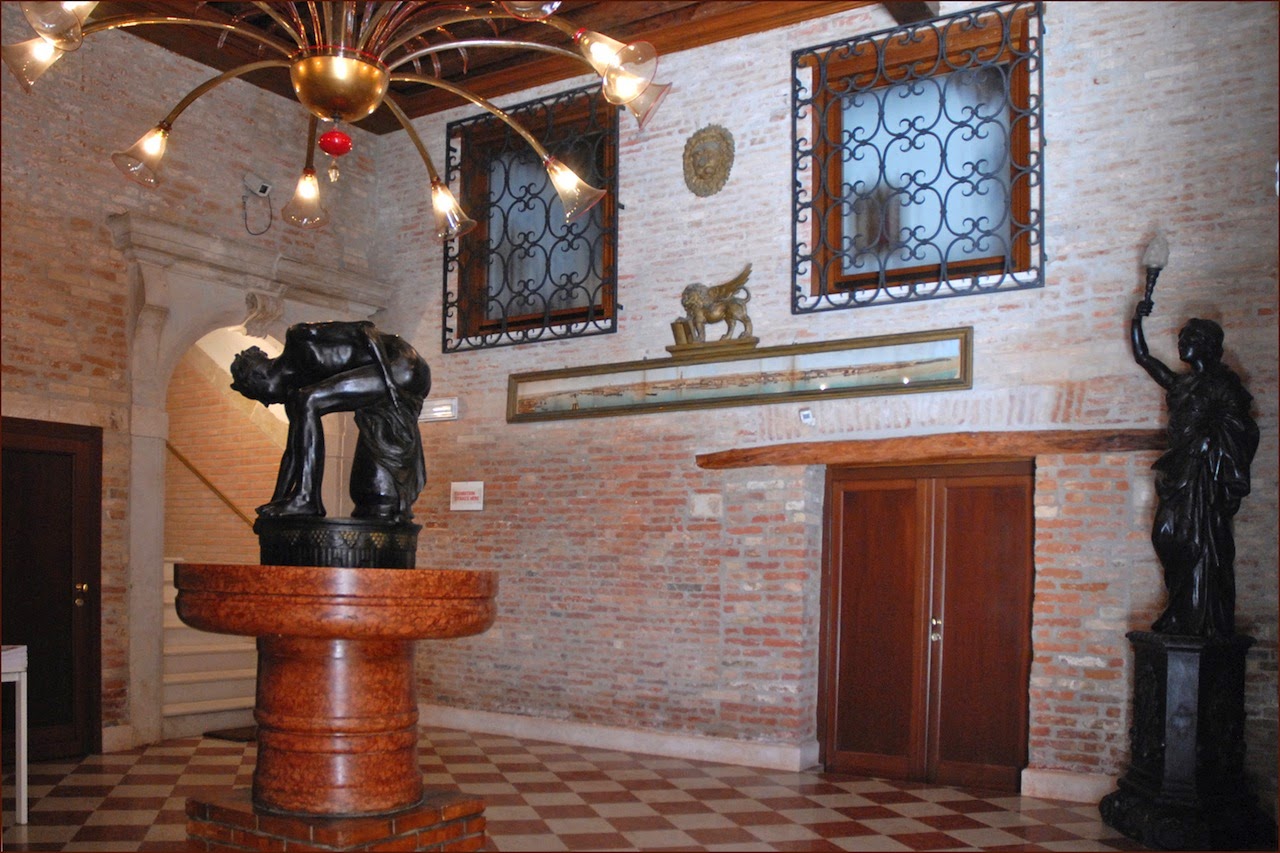 The entrance of the Palazzo Bollani during the 53rd Venice Biennale. It was also the venue for Costa Rica’s cancelled pavilion this year. (Image via Jean-Pierre Dalbéra/Flickr)
Over the course of the last month, the number of countries exhibiting at the 56th annual Venice Biennale has dropped from 90 to 88, following the withdrawal of Costa Rica and Kenya from the show. More 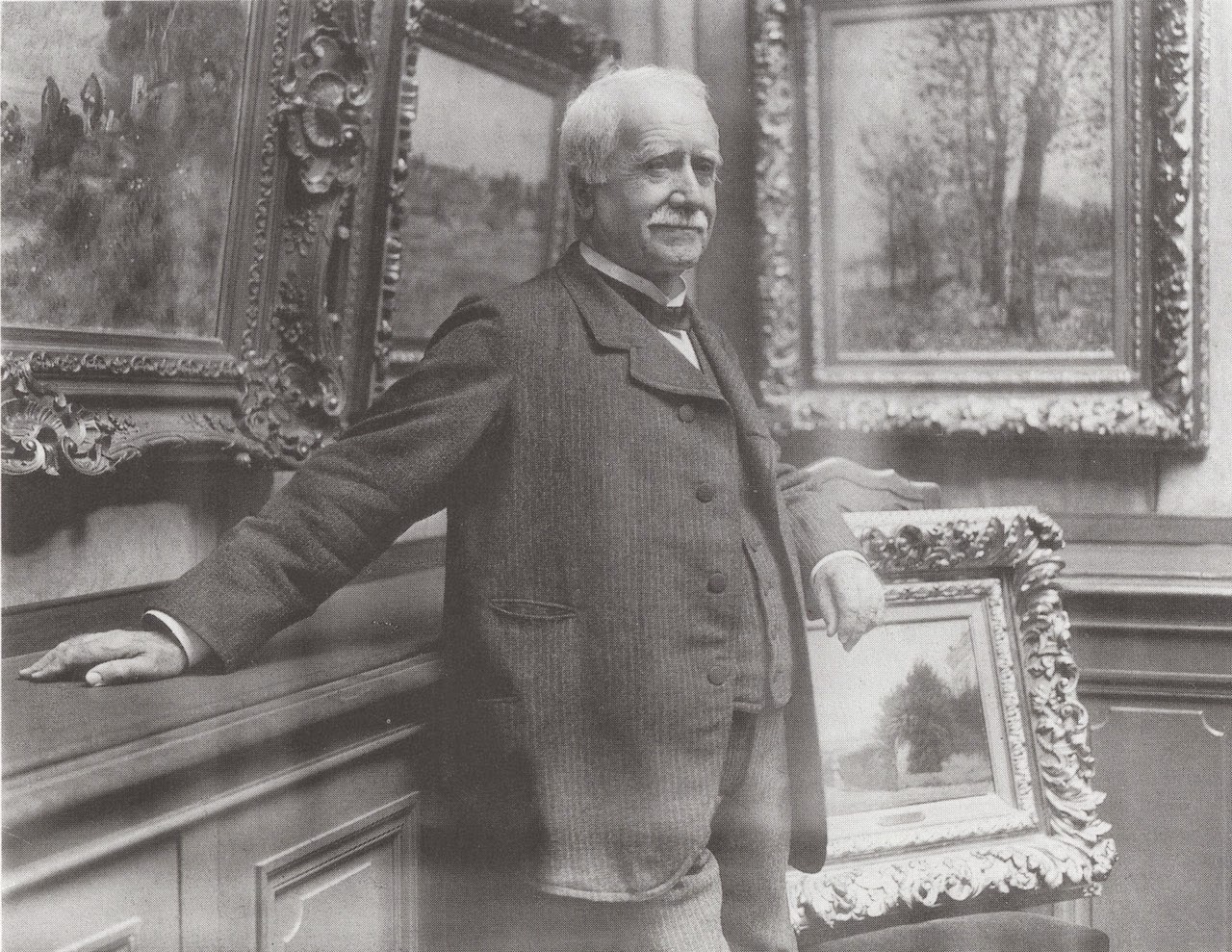 The Dealer,  Paul Durand-Ruel, Who Made Impressionism Famous -

So universally popular are the Impressionists today, it’s hard to imagine a time when they weren’t. But in the early 1870s they struggled to be accepted. Shunned by the art establishment, they were even lambasted as ‘lunatics’ by one critic. 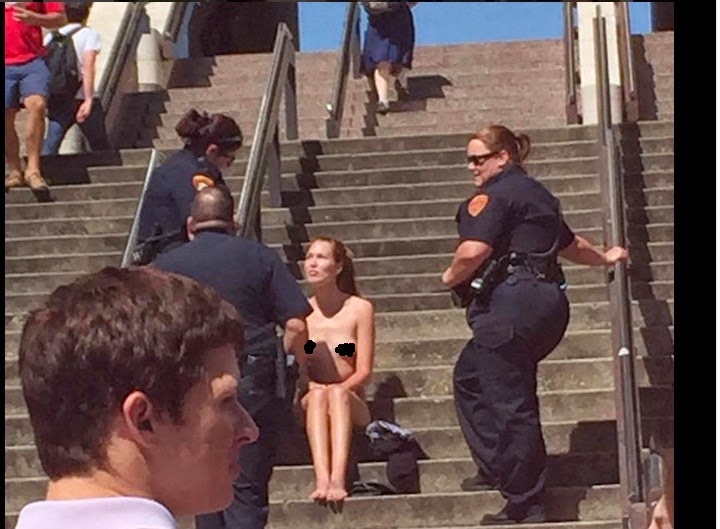 Monika Rostvold temporary removed her blindfold to interact with campus police.
Monika Rostvold, an art student at Texas State University, sparked a frenzy both on campus and online Monday when she sat on the steps of her university's library wearing nothing but a blindfold, a nude-colored thong, and pasties. More 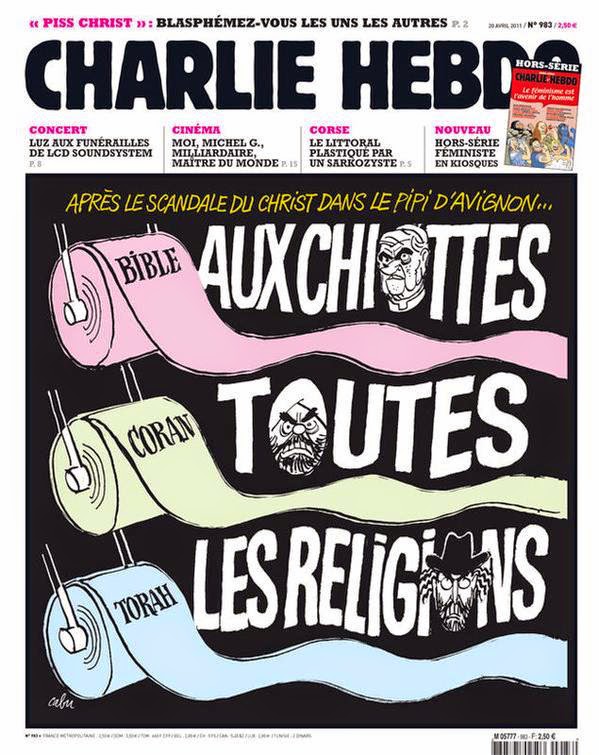 More
Figueres, Spain: Art of Salvador Dalí
Georgina Adam wants to know why Sotheby’s is carting a lot of art to Qatar only to sell it back to buyers in Europe and North America. Sotheby’s said it “sets out to attract an international spread of bidders and buyers”. A painting by Kour Pour, the hot young US-based artist whose work is inspired by carpets, sold for $162,500, well over its $70,000-$90,000 estimate, going to a US buyer. More 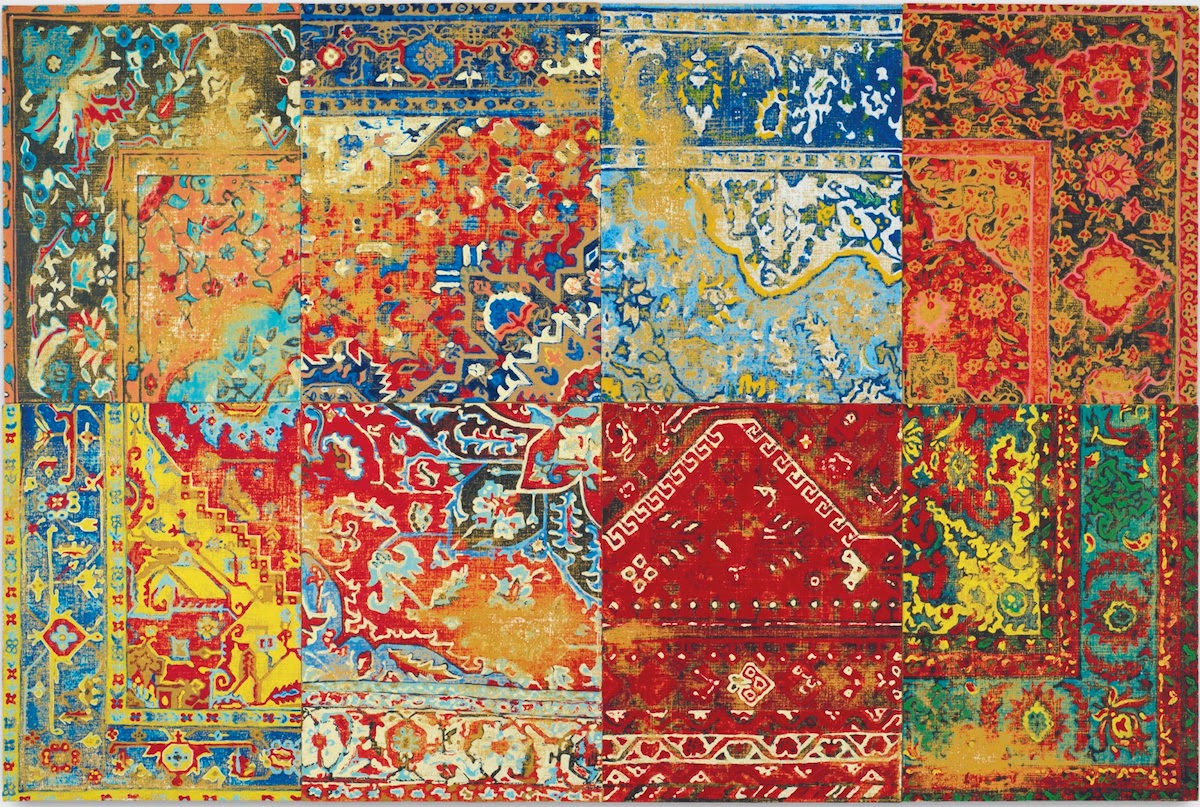 Kour Pour
The Nicholas Roerich Museum will sell two works by Roerich's works that have never appeared at auction before to fund acquisitions: 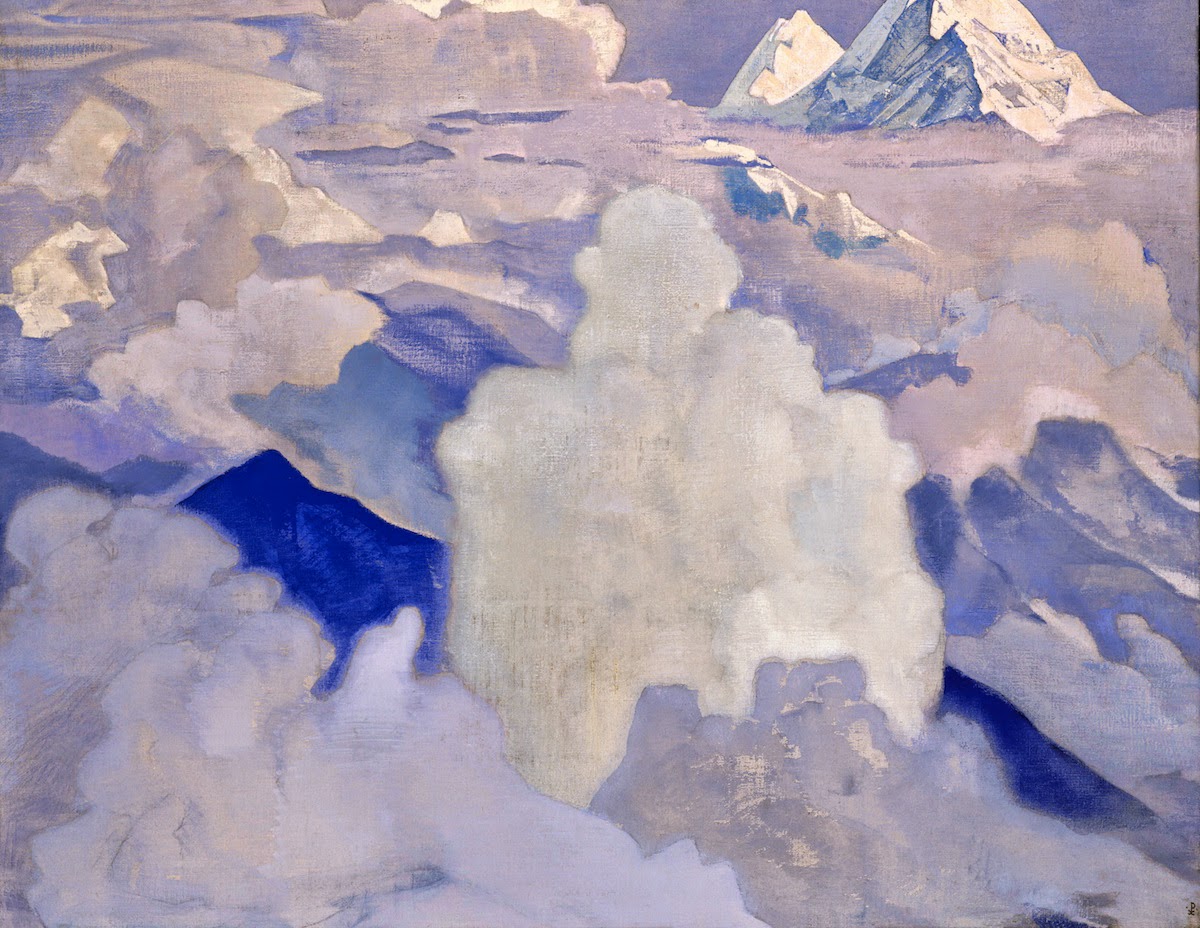 His Country, dedicated to the interpretation of the Himalayan landscape. 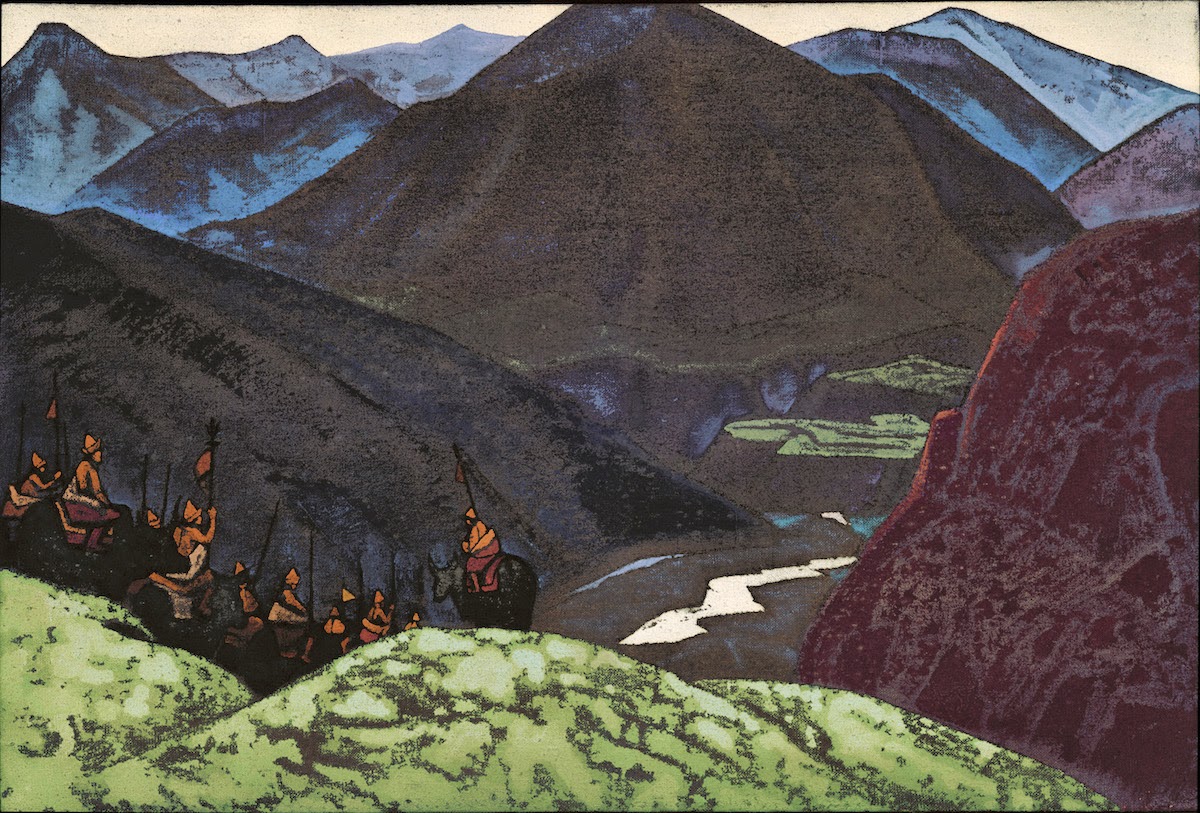 Nicholas Roerich (October 9, 1874 – December 13, 1947) – was a Russian painter, writer, archaeologist, theosophist, perceived by some in Russia as an enlightener, philosopher, and public figure, who was influenced by a movement in Russian society around the occult. He was interested in hypnosis and other spiritual practices and his paintings are said to have hypnotic expression. 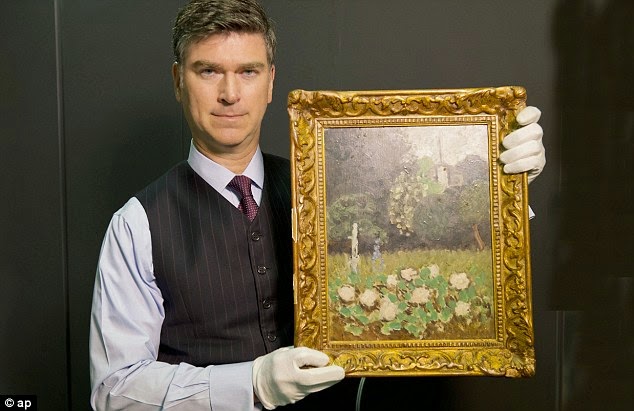 The world's top detective for Nazi looted art: Sleuth has tracked down £250 million worth of stolen art including priceless works by Picasso, Renoir and Matisse.  Read more 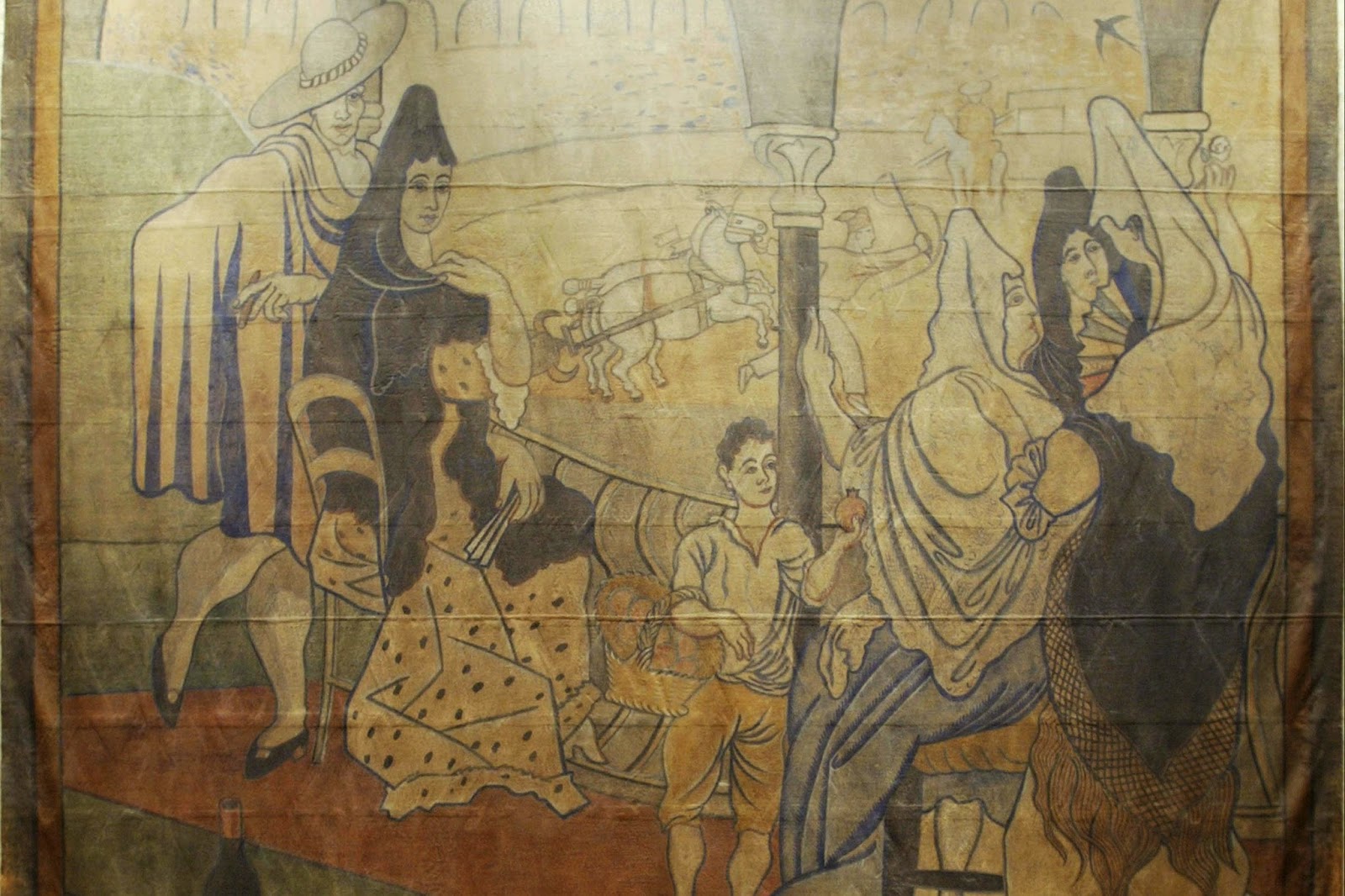 Picasso stage curtain painting going on view - A stage curtain believed to be the largest Pablo Picasso painting in North America is set to be displayed at a New York City museum.
Measuring 20 feet by 19 feet, “Le Tricorne” or “The Three-Cornered Hat,” was painted in 1919 for an avant-garde ballet troupe. It hung at the storied Four Seasons restaurant for 55 years.
It will be placed on long-term view at the New-York Historical Society beginning May 29. A related exhibition will run from May 29 through summer 2016. More 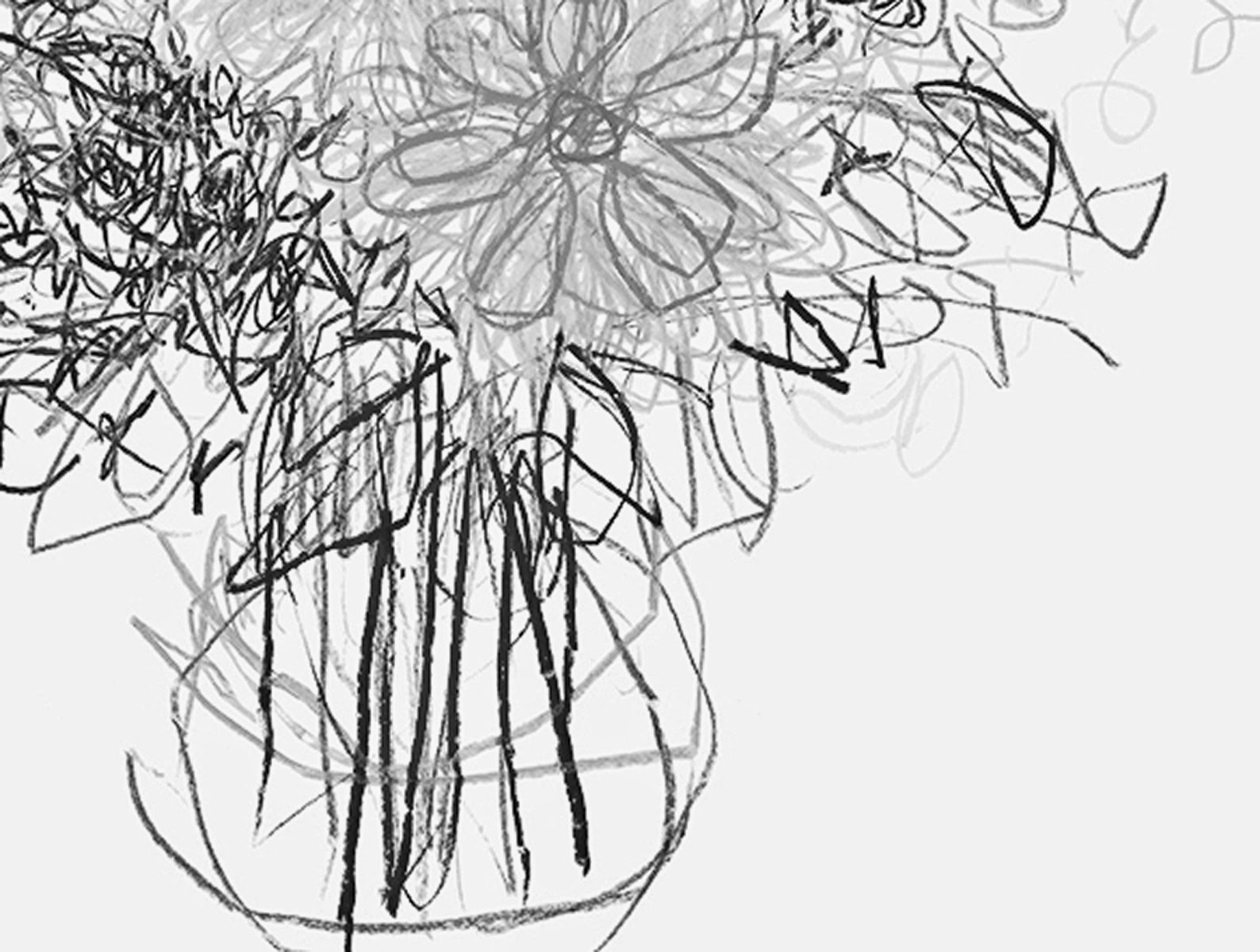 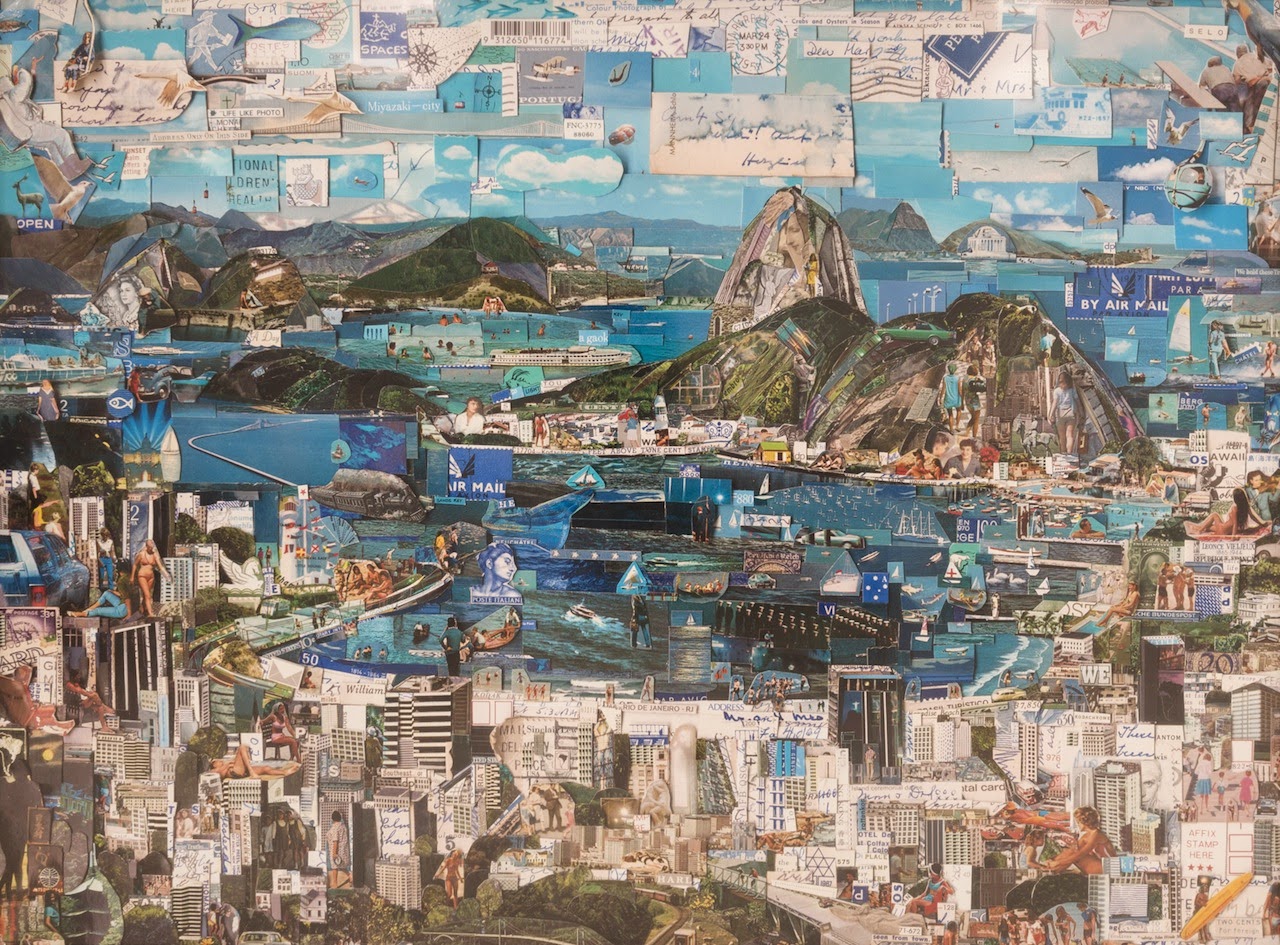 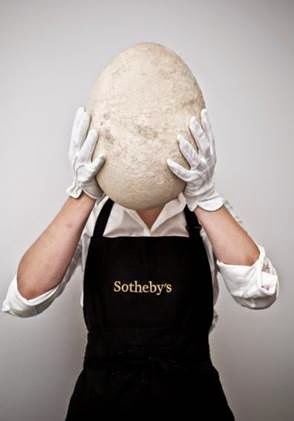 SOTHEBY’S TO AUCTION BIG ASS EGG - “Nearly 200 times the size of a chicken egg and at least 400 years old”, “Laid by the largest bird ever to live on the planet”. 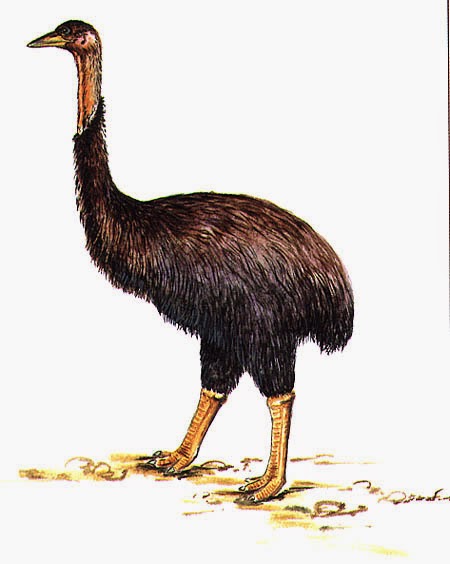 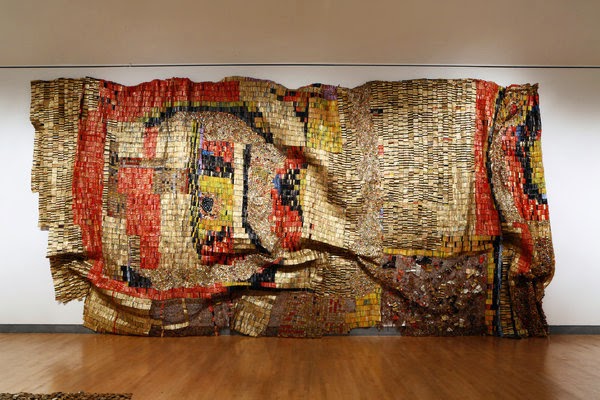 El Anatsui’s Earth’s Skin (2007), in the collection of the Guggenheim Abu Dhabi.
The Venice Biennale, which opens to the public in a little more than three weeks, announced today that it has awarded its highest honor, the Golden Lion for Lifetime Achievement, to artist El Anatsui, saying in a statement that the prize “acknowledges not just his recent successes internationally, but also his artistic influence amongst two generations of artists working in West Africa. More 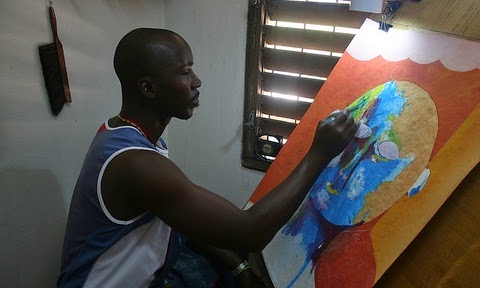 Juan Antonio Picasso
“Los Picassos Negros” (“The Black Picassos”).
Pablo Picasso’s maternal grandfather, Francisco Picasso Guardeño, left Spain in the late 1800s to pursue business opportunities in Cuba. He died on the island in 1888, but not before falling in love and having four children with an Afro-Cuban woman, Cristina Serra.

Juan Antonio Picasso is one of more than 40 living descendants of that union, the Cuban branch of the Picasso family, and he is the only one who is known to make his living as an artist. 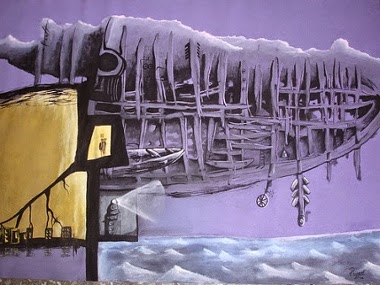 Juan Antonio Picasso - Se Van Los Seres. Photograph: Julie Schwietert Collazo
Except for his passion for art and the fact that his home town of Havana, like Pablo's Malaga, looks out over the sea, Juan Antonio has few similarities with the great Spanish artist. 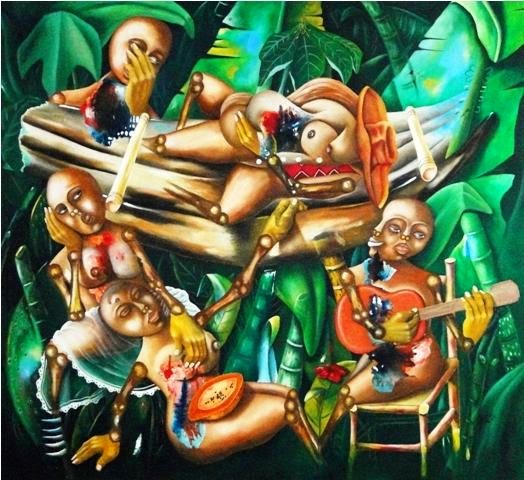 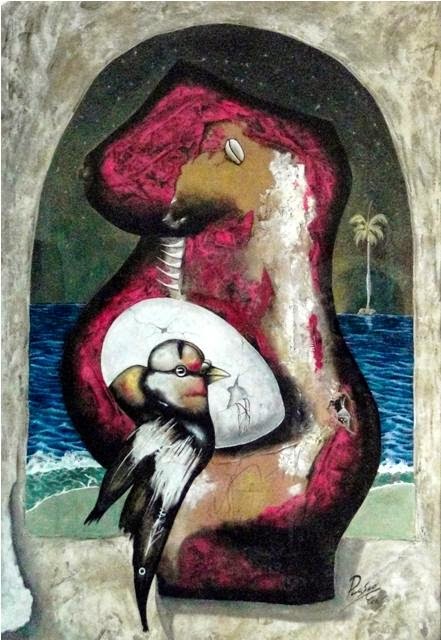 Juan Antonio Picasso - Yose y Paloma.70x50cm-Tempera
He has currently mounted in Havana his third one-man show, after his March 2005 exhibition in the northeastern Spanish town of Figueras, where, he said, "it all went very well." "Mixtures," as he has dubbed his exhibition, brings together 31 works in oil, charcoal, water colors and tempera, in a compendium of nods at Cuban daily life not lacking in references to the island's syncretic religions or the kitchen appliances the government hands out to the island's inhabitants.
More: Guardian, LinkedIn,   Artnet, DominicanToday 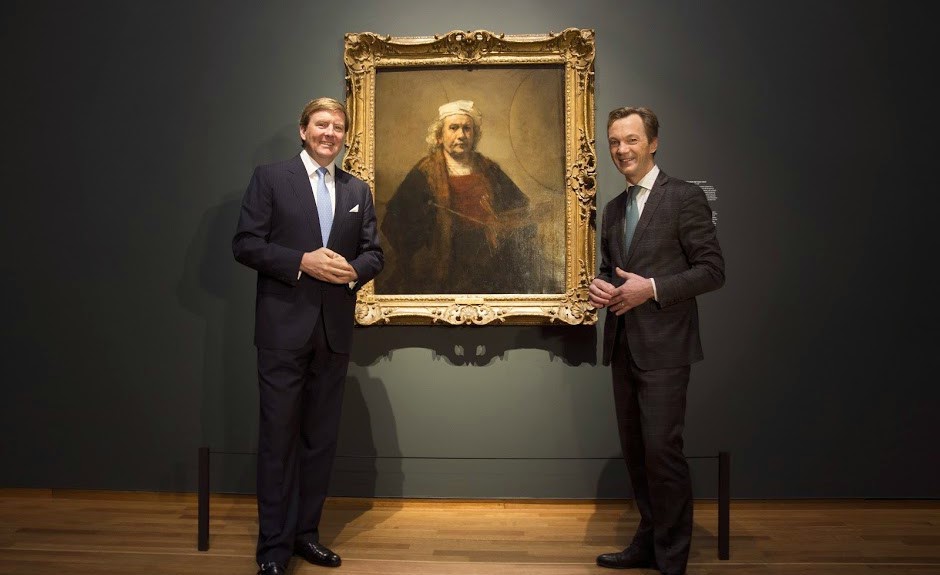 The Rijksmuseum exhibit The Late Rembrandt has already drawn about 400 thousand visitors. This is great news for the museum, but apparently not for some of the visitors. The museum has also receive hundreds of complaints about how the busy the museum is, especially from Dutch people.
This is according to Rijksmuseum director Wim Pibjes, who is absolutely absolutely thrilled that the exhibit has drawn so many visitors, Het Parool reports. More 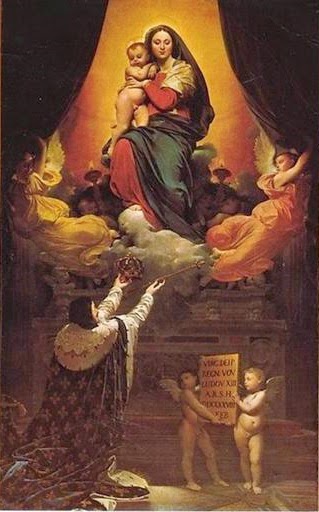 The found painting is thought to be the second version of Ingres's Le Vœu de Louis XIII (The vow of Louis XIII, 1824) Photo via: Wikipedia

The chance discovery of a painting by Jean-Auguste-Dominique Ingres, located in the town of Lons-le-Saunier, in the French province of Jura, was made during an inventory conducted by Emmanuel Buselin, curator and advisor of historical monuments of the region, the work was found in the attic of the chapel of the former hospital Hôtel-Dieu, Le Monde reports. More

A detail of the Ingres painting found in Jura, Photo via: La Voix de Jura
Posted by Henry Zaidan at 4:07 PM