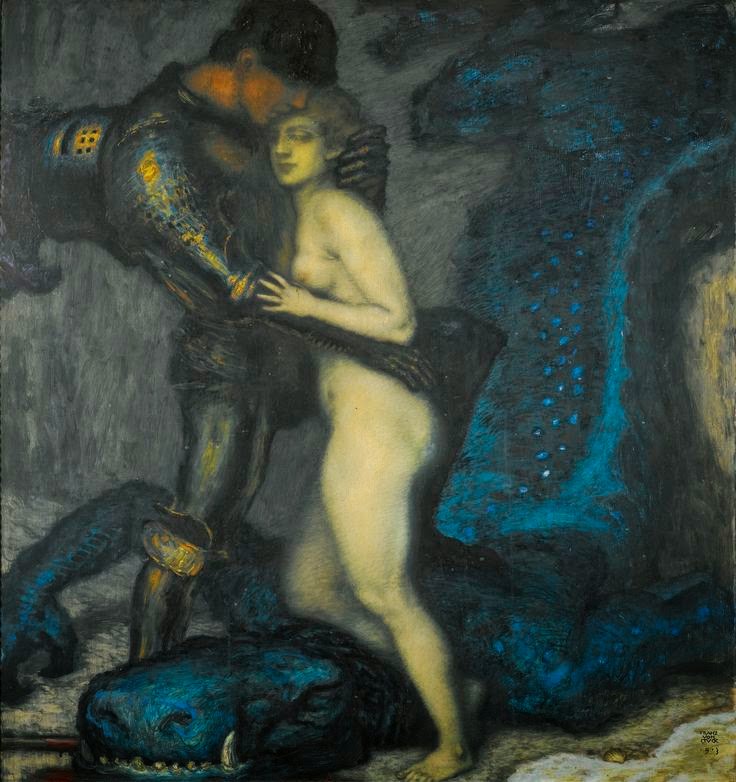 Franz von Stuck
1863 - 1928
GERMAN
THE DRAGON SLAYER
signed and dated FRANZ / VON / STUCK / 1913 lower right
oil on panel
135 by 126cm., 53¼ by 49½in
Thee Dragon Slayer is a particularly charged rendition of an age-old theme. Although most of Stuck's paintings depict scenes from the Antique or the Bible, neither the title The Dragon Slayer nor the iconography reveal the exact story behind the present work. Stuck's fascination with Greek legends suggests the subject to be Perseus and Andromeda, although Medusa's head and Perseus's winged shoes are missing. As early as 1900 Stuck’s contemporary, Lovis Corinth (lots 3, 4 & 5), had painted the hero as a medieval knight rather than a Greek half-god, and his Perseus and Andromeda may have been a possible source of inspiration for the present work. Another obvious influence would have been the biblical story of St. George, who kills the dragon to save a virgin. More 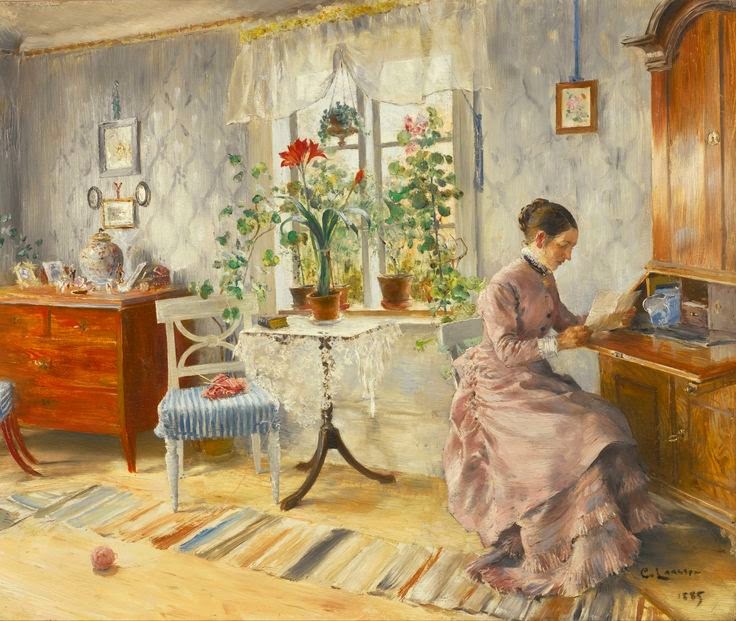 Carl Larsson
1853 - 1919
SWEDISH
THE LETTER
signed and dated C. Larsson / 1885 lower right
oil on panel
45 by 54cm., 17¾ by 21¼in.
Painted in September 1885, the present work captures all the delightful light-filled incident to be found in the drawing room in Lilla Hyttnäs in Sundborn, the cottage occupied at the time by Karin Larsson’s two great-aunts Ulla and Maria. The oil marks Carl Larsson’s first visit to the property, his and Karin's home-to-be, and records the traditional interior that he found there.
The prevailing style reflects the Gustavian taste of the day, as evident in the mahogany drawers and bureau, while Ulla, beautifully presented in her finely tailored dress, is perched on one of two Gustavian chairs engrossed in reading a letter, itself a traditional compositional pose. More 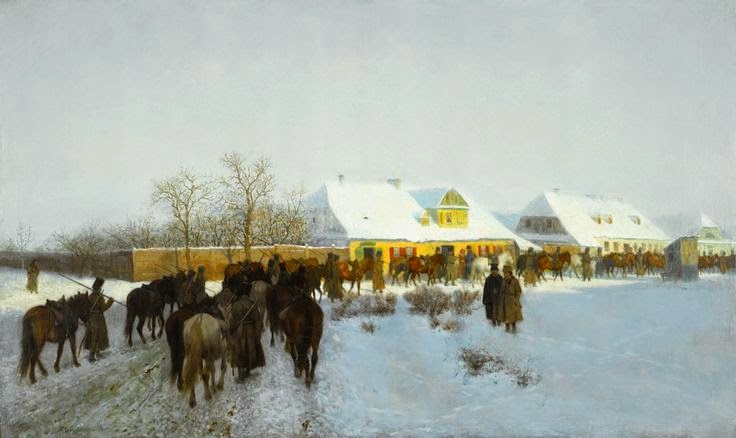 Maksymilian Gierymski
1846-1874
POLISH
POLISH MILITIAMEN
signed M. Gierymski and indistinctly dated 187[?] lower left
oil on canvas laid on panel
48 by 80cm., 19 by 31½in.
Painted circa 1872, the present work was inspired both by Maksymilian Gierymski’s personal experience as a Polish insurgent fighting the Russian forces in the January Uprising of 1863,  and by the landscapes of  his homeland, which he revisited with his brother Aleksander in the summers of 1870-72.
Gierymski was a Munich-based painter and draughtsman, and together with Jozef Brandt and his younger brother Aleksander one of the greatest  Polish representatives of the so-called Munich school. He was a precursor of realism in Polish painting of the second half of the 19th century, an artist capable of finding beauty and poetry in the everyday prose of life and the mundane reality of provincial towns, often depicting autumn or winter landscapes or village scenes that constituted backgrounds for tired soldiers passing through them, as in the present work. More 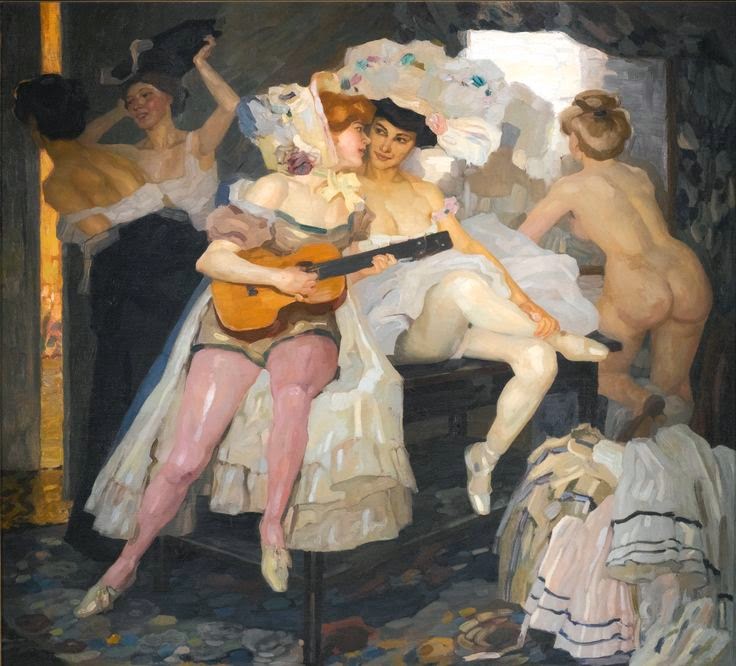 Inspired by his stay in Paris, Backstage is a masterful evocation of the French capital's demi-monde that was the source of fascination to so many painters, most famously Toulouse Lautrec. Putz would have frequented Pigalle's many cabarets and café concerts, including the Moulin Rouge, Moulin de la Galette and the Folies Bergère, which were synonymous with the dancers like La Goulue (Louise Weber) and Jane Avril who performed there. More 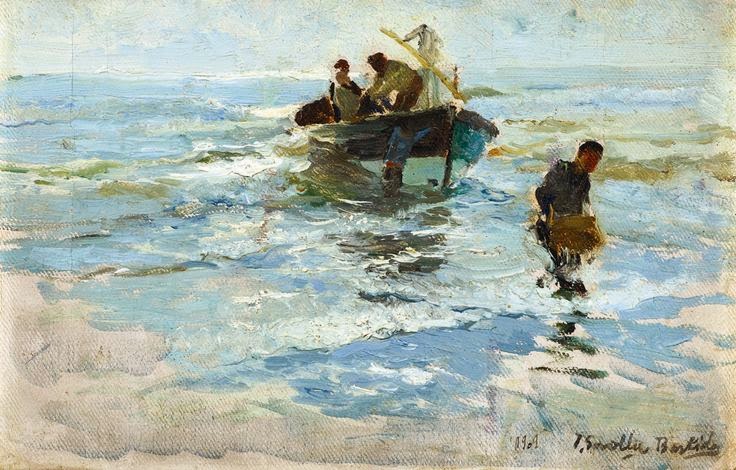 Joaquín Sorolla
1863 - 1923
SPANISH
RECOGIENDO LA BARCA, PLAYA DE VALENCIA (THE RETURN OF THE BOAT, VALENCIA BEACH)
signed and inscribed 1909 J. Sorolla Bastida lower right
oil on canvas
16 by 24cm., 6¼ by 9½in.
Pinted in Valencia circa 1900. Blanca Pons Sorolla suggests the 1909 inscription may relate to traces of a former dedication, rather than corresponding to the date of the painting. More

Maximilian Lenz
1860-1948
AUSTRIAN
GODDESS IDUNA AND PEACOCK
signed and dated MAXIMILIAN LENZ / WIEN 1932 on the reverse
oil on canvas
88 by 212cm., 34¾ by 83½in.
Iduna, or Iðunn, is the god in Norse mythology associated with fertility and youth. As here, she is typically depicted bearing apples. More 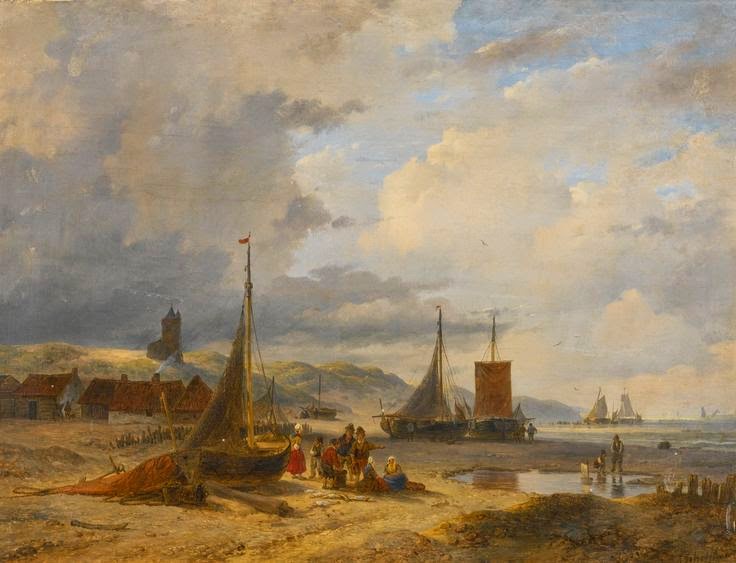 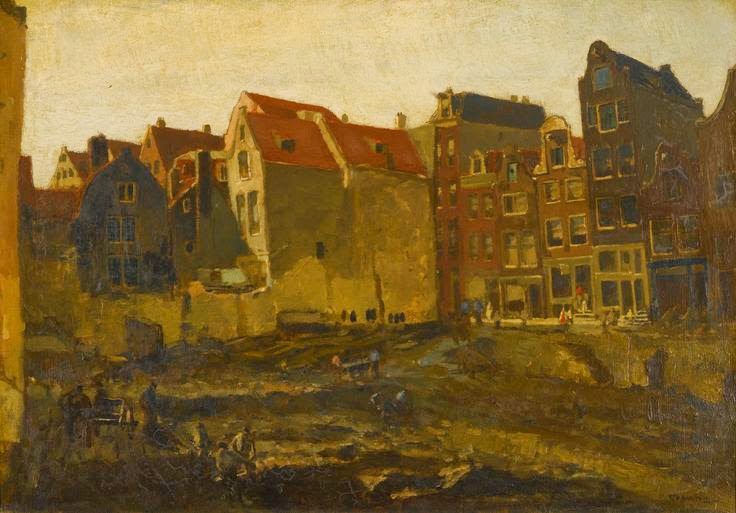 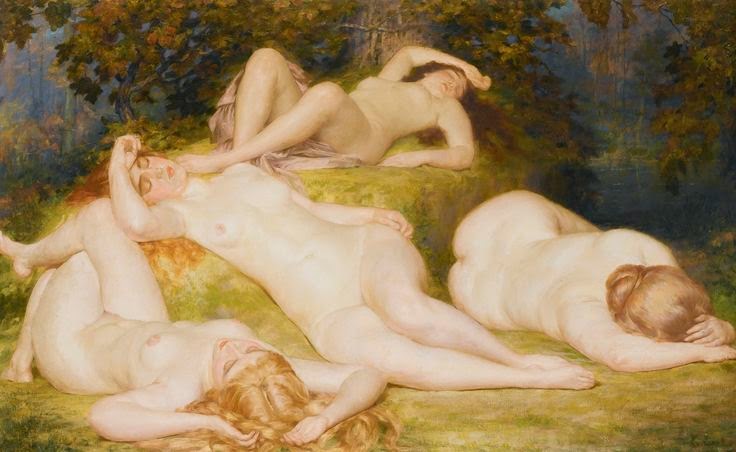 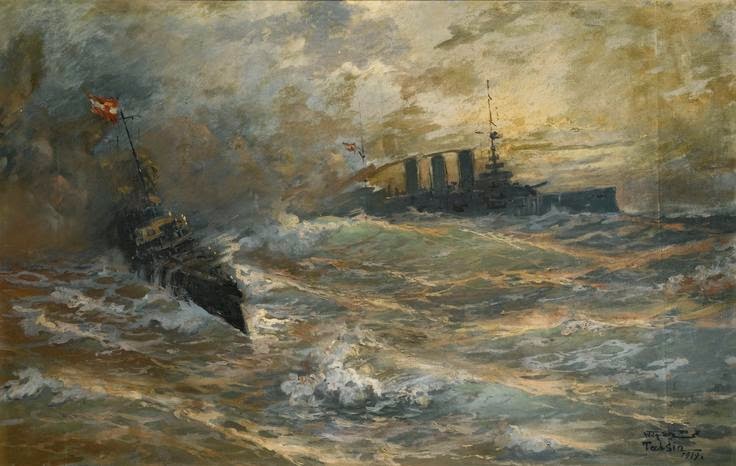