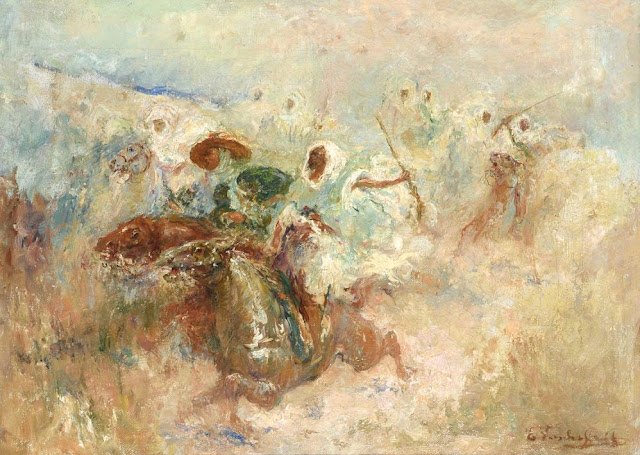 Fantasia is a traditional exhibition of horsemanship in the Maghreb performed during cultural festivals and to close Maghrebi wedding celebrations. "Fantasia" is an imported name, the actual traditional term used is lab el baroud.

The performance consists of a group of horse riders, all wearing traditional clothes, who charge along a straight path at the same speed so as to form a line, and then at the end of the charge (about two hundred meters) fire into the sky using old muskets or muzzle-loading rifles The difficulty of the performance is in synchronizing the movement of the horses during acceleration of the charge, and especially in firing the guns simultaneously so that one single shot is heard. The horse is referred to as a fantasia horse and are of Arabian, Andalusian or Barb stock. More on Fantasia

Edouard Verschaffelt was a Belgian orientalist painter born in Ghent in 1874 and died in Bou Saâda in 1955. He was deeply rooted in Algeria. He produced paintings of the roots and passion of this Algerian reality, so abused by orientalist exoticism. Edouard Verschaffelt took a contrary view of academic, colonial Orientalism. A pupil of the Antwerp School of Fine Arts, he carries with him, from the beginning, the indelible traces of Flemish painting and the attraction of Impressionism.

Unlike other Orientalists attracted by North Africa, Edouard Verschaffelt came to Algeria in 1919 to flee the German occupation of Belgium during the First World War. He settles in the country and immediately felt a fascination for Bou Saâda, that he adopted from the outset. Bou Saâda was, at the time, the "stronghold" ofDinet who is a notable of the city especially He converted to Islam; which gives him an extraordinary aura to the Aboriginal population.

After the death of his wife, Verschaffelt marries an Algerian, from the tribe Ouled Sidi Brahim, who appears in the many paintings he devoted to him throughout his life. More on Edouard Verschaffelt

Please visit my other blogs: Art Collector, Mythology, Marine Art, Portrait of a Lady, The Orientalist, Art of the Nude and The Canals of Venice, Middle East Artists, and visit my Boards on Pinterest

Thank you for visiting my blog and also for liking its posts and pages.

Please note that the content of this post primarily consists of articles available from Wikipedia or other free sources online.