01 Painting by the Orientalist Artists in the Nineteenth-Century, with footnotes, #77 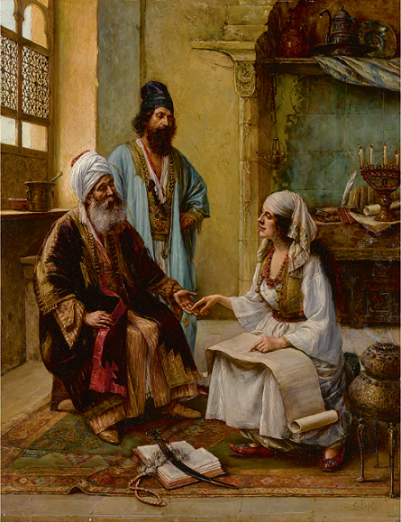 In the Middle East, fortunetellers use tarot cards kept in red boxes and read coffee grounds and buy prophetic poems by medieval sages. In Iran, fortunetellers use jyotish (“the science of light”), a practice related to astrology that is said to have originated in Persia. Sessions often last two hours.

Clemente Pujol de Gustavinon. Not only was he a highly talented painter in oils and watercolours but as a skilled draughtsman, Pujol was a very accomplished engraver. His subject matter varied, ranging from portraiture, figurative and genre scenes to superb Oriental views, especially those set in Morocco and Algiers, for which he gained great renown. Of Spanish extraction, he was born near Barcelona in about 1850. Pujol began his formal art education in Barcelona at the Escuela de Bellas Artes; he firstly made a name for himself when from 1871 to 1874 he showed at the Exposiciones Barcelonas de Belles Artes. Having already established repute in his native country, in 1876 Pujol travelled to Paris where he furthered his artistic studies at the Ecole des Beaux-Arts under Louis Nicolas Cabat (1812-1893) and then under Jean Léon Gêrome (1824-1904). Gêrome had a profound influence on Pujol’s art, not only in his love of North Africa and its people but also in his use of dramatic colouring and attention to detail.
Pujol enjoyed great success at the Paris Salon from 1876 up until 1905 for his genre scenes, historical costume dramas and subsequently Oriental paintings. In addition to Paris, he showed his pictures in Austria, at Munich in 1883 and contributed to the Barcelona exhibition of Sala Parés in 1884. During the 1880s he began executing works inspired by the Orient. Pujol also gained considerable acclaim at the Paris Salon when he exhibited Prière à Mosquée in 1888 and Depart Pour la Chasse in 1889. That same year he was awarded an honorable mention for his Orientalist painting Danse Mauresque and others at the Universal Exhibition of Paris. Further awards were to follow. More on Clemente Pujol de Gustavinon

Please visit my other blogs: Art Collector, Mythology, Marine Art, Portrait of a Lady, The Orientalist, Art of the Nude and The Canals of Venice, Middle East Artists, and visit my Boards on Pinterest

Thank you for visiting my blog and also for liking its posts and pages.

Please note that the content of this post primarily consists of articles available from Wikipedia or other free sources online.
Posted by Henry Zaidan at 3:55 PM